The second son of the five children of businessman August Lichtenberg and his wife Emilie née Hubrich, Bernhard Lichtenberg grew up in the predominantly Protestant environment of Ohlau, a county seat in Central Silesia – during the Cultural Wars and at a distance from the authoritarian Prussian State. After graduation from the Ohlau Classical High School and studies in theology at the universities of Innsbruck and Breslau, he was ordained by Prince Bishop Cardinal Kopp in Breslau Cathedral on June 21, 1899. His first assignment was as third vicar in the urban parish church of St. Jakob in Neisse. Beginning in August 1900, he worked tirelessly and fearlessly in pastoral ministry in the expanding na­tional capital – first as assistant pastor in St. Mauritius, Friedrichsberg-Lichtenberg (1900–1902), then at Sacred Heart in Charlottenburg (1902–1903) and St. Michael in Berlin (1903–1905) and finally as curatus in Friedrichsfelde-Karlshorst (1905–1910) and Pankow (1910–1913). After this pastoral ap­pren­ticeship, Lichtenberg became parish priest of Sacred Heart in Charlottenburg on March 18, 1913. In spite of an abundance of seemingly insurmountable financial and personnel-related obstacles, he suc­ceed­ed in establishing five new filial parishes within the oversized Sacred Heart parish, which com­pris­ed over 30,000 Catholics. Lichtenberg gathered together the funds necessary for the con­struction of the filial churches during numerous fundraising trips (including one to Chicago in 1926). As a mem­ber of the Centrist Party in the Charlottenburg municipal assembly, he viewed his political engagement as a representative of the Catholic minority to be a specific form of priestly responsibility at a secular level.

After Berlin had become a diocese, Lichtenberg was appointed resident Domkapitular (Canon) in 1931, Cathedral Parish Priest of St. Hedwig in 1932 and, finally, Provost of the Cathedral Chapter in 1938. He had thus gained a prominent position in the Church hierarchy; in a manner of speaking, he was re­gar­ded as second only to the Bishop (Dignitas post Pontificalem major). As Councillor of the Diocesan Curia he oversaw the visitation of sites of the female orders, and the care of alcoholics, converts, settlers and, above all, of the non-Arian Catholics persecuted by the National Socialist regime for whose charitable and pastoral care the Church established a specific social service (Hilfswerk) in August 1938.

Of particular note has been Lichtenberg’s public prayer given in St. Hedwig’s Cathedral under the impact of the anti-Jewish pogrom of November 9, 1938 (the Reichskristallnacht or Night of Broken Glass): We know what was yesterday. We do not know what will be tomorrow. But we have experienced what happened today. Outside, the Temple is burning. That is also a House of God. (Memoir of Elisabeth Kleemann; DAB V/26: Proc. doc. varia, W 24). From then on, Lichtenberg publicly prayed for the Jews and non-Arian Christians every day, as he did for all others in need or in danger of persecution.

In an evaluation by the SS Security Service dated April 26, 1940, he was characterized as a fanatical fighter for the Catholic cause, and an equally fanatical opponent of National Socialism which, to him, is both heresy and godlessness. Recently, his activities have focused on organizing a social service for non-Arian Christians, whose emigration from Germany he wished to facilitate and bring about through letters of recommendation and preparation of certificates (BArch, ZwArch D-H, ZB I 1584, 249).

Shaken by Bishop Count Galen’s Incendiary Sermon (Brandpredigt), Lichtenberg also protested, on August 26, 1941 against the euthanasia murders of physically and mentally handicapped individuals: my priestly soul is burdened by my complicity in these crimes against moral and public law. Even though I am only one individual, I still demand, as a human being, as a Christian, priest and German citizen, an accounting from you, Mr. Reich Physician Leader, for the crimes which are being perpetrated at your command or with your approval and which are provoking the Lord of Life and Death to bring revenge upon the German nation (, 80).

For October 26, 1941, he prepared an announcement to be read from the pulpit, which criticized an ostensibly anonymous antisemitic flyer – in fact disseminated throughout the country by the NSDAP (Berlin District Court PK Js 37/41 [321.41]). Lichtenberg wrote: In Berlin apartment houses, an anon­y­mous hate flyer is being distributed against the Jews. It makes the claim that any German who, out of allegedly false sentimentality, in any way supports Jews – even if only by means of kind behavior – is a traitor to his nation. Do not let this un-Christian attitude confuse you, but act according to Jesus Christ’s strict commandment: Thou Shalt Love Thy Neighbor As Thyself. The announcement was never made because Lichtenberg was arrested by the Secret State Police (Gestapo) on October 23, 1941, for sub­ver­sive activities. During his interrogation, he frankly admitted on October 25, 1941, (DAB V/26) that I disapprove spir­i­tually of the evacuation [of the Jews] with all its attendant circumstances, be­cause it violates the principal commandment of Christianity: Thou Shalt Love Thy Neighbor As Thyself, and I re­cognize any Jew as my neighbor, too, endowed with an immortal soul created in the image and like­ness of God. But since I am unable to prevent or impede this order by the Reich, I was determined to accompany deported Jews and Jewish Christians into exile, in order to serve them there as their spiritual guide. I seize this opportunity to ask the Secret State Police to permit me to do so. The Ge­sta­po’s final report, dated November 3, 1941, emphasized Lichtenberg’s adverse attitude toward the Na­tional Socialist regime and its racial policy, especially because Lichtenberg repeatedly (without being prompted) stated his willingness to be sent to camp as spiritual guide (Interrogations on October 25 and November 3, 1941; cf. Lichtenberg to Stenig, November 4, 1942; Lichtenberg to Ostendorf, March 15, 1943; file entry Bishop Count Preysing, September 29, 1943), an assignment which the Ge­sta­po had initially and vaguely promised but not seriously considered for the Litzmannstadt (Łódź) ghetto.

On November 3, 1941, the local judge issued an arrest warrant against Lichtenberg, who was taken to the Alt-Moabit Pretrial De­ten­tion Facility in Berlin (Cell 367). Lichtenberg’s appeal against this arrest warrant was rejected by the special court on November 8, on the grounds that Lichtenberg disturbed the peace by his public prayer; that the criticism of governmental actions expressed in the prayer was at the same time incendiary; that Lichtenberg was strongly suspected of having violated the Law Against Acts of Subversion (Heimtückegesetz) in two instances, and of having misused the pulpit in one instance; and that his detention was therefore justified because, as the accused admits, it may be assumed that he would abuse his freedom by repeating the violation, and because leaving the accused at large would be unjustifiable due to the severity of his crime. Based on the December 2, 1941, report by the Prosecutor General at the Berlin District Court, supplemented on January 5, 1942, the Reich Minister of Justice ordered Lichtenberg on March 3, 1942, to be indicted for violation of the Law against Acts of Subversion. On May 22, 1942, Special Court I of the Berlin District Court (District Court Pre­sident Wulf Boeckmann, District Court Councillor Dr. Paul Hinke, District Court Councillor Ernst Her­furth, Public Prosecutor Walther Nuthmann) sentenced Lichtenberg to serve a total of two years in prison for pulpit misuse in one instance and for violation of Section 2 of the Law Against Acts of Subversion in an additional instance, the period of police and pretrial detention counting toward to prison term and to pay the litigation costs in the amount of 1185,78 RM (Reichsmark). The brave de­fense counsel, Attorney-at-Law Dr. Paul Stenig, had pleaded for acquittal. Appeal against the Special Court sentence was not possible. On May 29, 1942, Lichtenberg was transferred from the pretrial detention facility to the Tegel Prison in Berlin (Cell 232), where he remained until the end of his prison term – with the exception of the stays in the prison infirmary. The requests for release from prison filed by Bishop Count Preysing because of Lichtenberg’s alarming physical condition were as much in vain as the cautious diplomatic endeavors by Apostolic Nuncio Cesare Orsenigo. On September 29, 1943, Bishop Count Preysing was able to deliver in person a message of greeting from Pius XII. The Pope wrote on April 30, 1943: It has comforted Us … that the Catholics of Berlin have shown much love to the so-called non-Arians in their time of distress, and in this context We utter a particular word of fatherly praise and tender sympathy to the incarcerated Prelate Lichtenberg. Lichtenberg was quite overwhelmed by happiness over the Pope’s sympathy (, 105 and 111).

Lichtenberg’s physical condition, already severely impaired before his arrest, had significantly de­te­riorated during his imprisonment due to inadequate nutrition and the upsetting circumstances of prison days. Because of progressive kidney and urinary-tract disease, he had to be hospitalized repeatedly. Even on the day before the scheduled release, he was in very serious general condition in the prison infirmary. However, he was not released but was automatically remanded to the Gestapo and taken to the labour training camp Wuhlheide in Friedrichsfelde. The Reich Security Agency ordered his transfer to Dachau Concentration Camp, even though his alarming physical condition was on record.

Group Prisoner Lichtenberg arrived in Hof as part of a larger prisoner transport on November 3, 1943 and was transferred on orders of the prison doctor to the Hof Municipal Hospital the next morning be­cause of his obviously life-threatening condition. There he died on Sacred-Heart-of-Jesus Friday, No­vem­ber 5, 1943, toward 6 p.m. Contrary to expectations, his body was not cremated but released by the local police, transferred to Berlin and interred in the Old Cathedral Cemetery of St. Hedwig on November 16, 1943, following a Pontifical Requiem in the Church of St. Sebastian. From 1965 to 2018, his re­mains lay in the crypt of St. Hedwig’s Cathedral; they are now temporarily in the memorial church of Maria Regina Martyrum.

The beatification as a martyr was celebrated in Berlin on June 23, 1996 by Pope John Paul II, who permitted limited devotional adoration of Bernhard Lichtenberg and designated the day of his death, November 5, as the liturgical memorial day. In 2004 Yad Vashem, the Israeli Holo­caust Martyrs‘ and Heroes‘ Remembrance Authority, posthumously awarded him the distinction Righteous among the Nations. 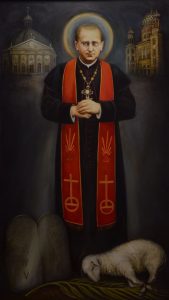